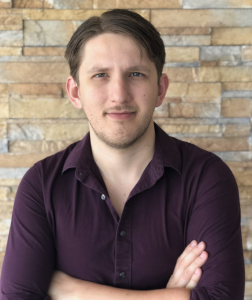 Scott’s career in tourism and hospitality began while he was living in Cocoa Beach, Florida. He achieved impressive hospitality career growth by working at various hotels and cruise ports, and being inspired by the success and ambition of his colleagues.

“It was fun to be part of the hospitality space in Florida,” he reminisces. “I liked being part of that culture of restaurant owners, hotel owners, and managers. They were all getting together and building a community, and I liked what they were doing.”

Northward and Upward with Narsi

Ready to start a family with his wife and achieve more growth in his hospitality career, Scott made a move. While networking with different hotel groups in Florida, he encountered an opportunity to work for Narsi. In 2018, Scott and his wife moved to North Carolina where he joined the Narsi family as Assistant General Manager at ​​Aloft Raleigh by Raleigh Durham International Airport.

Thinking back to his early job experiences, Scott says, “Narsi is a different scene from the work I did in Florida. Narsi leaves their managers to be independent. Leadership tells us that we’re the CEO of our own hotel. They don’t grab at dollars. They focus on what they want business-wise, and even turn down business that doesn’t fit.” The combination of autonomy and integrity coincided perfectly with Scott’s personality and work ethic.

While leadership gives their managers freedom, they are always there to provide support. “I can text or call Chris Ardolino, Narsi’s Vice President of Operations, as needed. I will make a decision, and things are critiqued on the back end if needed,” says Scott.

But leadership doesn’t get in the way of quick decisions when they need to be made. For example, if Scott notices a room needs a new air conditioner and he needs that room immediately, Narsi trusts him to make the right decision without getting involved. “Other companies I worked for needed three bids for the smallest thing,” says Scott. “Not Narsi. They tell me to do it because it’s not worth missing out on having availability for the room.”

After just a few years of Scott demonstrating his self-starter nature and sharp hotel management skills, Narsi promoted him to his current position of Area General Manager.

Scott encourages people interested in starting a career in hospitality or finding new roles within the industry  to explore opportunities at Narsi. Why is Narsi such a great place to work? Scott sums it up perfectly:

“We’re known for being a fair, safe, and no-nonsense environment. We give our associates the chance to show off the characteristics we hired them for.”

Additionally, Narsi offers competitive wages. In fact, Narsi increased wages at the start of the pandemic so that associates had a financial cushion. Not only did Narsi leadership increase wages, they refused to decrease room rates as well. Now that business has returned to some extent, Narsi’s pricing integrity has been able to maintain the same level of fairness and safety that people associate with the Narsi name.

And last but certainly not least, Scott regularly enjoys perks at Narsi such as daily lunch every day and celebrating new employees on the first Friday of every month in a company-wide celebration called First Fridays.

Personalities and Working Styles for Success

Successful Narsi associates share personalities and working styles with Scott: independent and professional. “Narsi is not the type of employer that’s going to stand beside you, do the work for you, and make you follow a rigorous guideline,” says Scott. Rather, Narsi hires people who shine in their work and choose to go above and beyond each day to grow their hospitality careers.

“You have to be ready to work in a community of professionals, find where you fit, and put in the work.” Scott adds. Narsi leadership lives by the adage “Take care of the business, and the business will take care of you.”

Narsi Properties is a private family-owned Hotel Development & Management company based in North Carolina. Founded in 1978 on principles of trust, authenticity, and family, we take pride in our community, guests, and team members as the cornerstones of our company values. Our philosophy of positive reinforcement ensures a comfortable and unique experience for hotel guests, in turn reassuring our investors and stakeholders of our consistent reliability and superior performance.